Home Health Education A watch that can detect atrial fibrillation

A watch that can detect atrial fibrillation 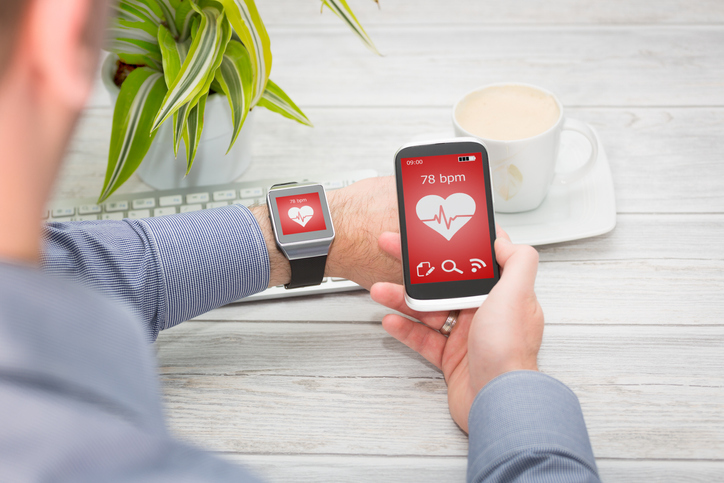 Did you ever think that a smartwatch alone would be able to diagnose atrial fibrillation? As the population ages and the “three highs”[1] become more common, so too does atrial fibrillation. While it does not have a huge impact on the body itself, it can cause blood clots to form, which can lead to serious consequences – for instance, blocking blood flow to the brain and causing a stroke. A smartwatch was approved by the US Food and Drug Administration (USFDA) for the first time to diagnose and alert patients to atrial fibrillation. The medical community hopes that the watch will help patients to obtain an early diagnosis and timely treatment.

According to previous studies, about 1% of the Hong Kong population suffers from atrial fibrillation, but we believe that many of them are unaware of their illness.

Part of the reason may be because the medical term “atrial fibrillation” is not widely understood by the public. In short, it is simply an irregular heartbeat. The heart collects oxygen-poor blood from the body, and pumps it to the lungs. After the blood picks up oxygen in the lungs, it then pumps the oxygen-rich blood to the other organs. The atria, the heart’s two upper chambers, store recovered blood, while the ventricles, the two lower chambers, are responsible for pumping the blood to the lungs and other organs.

However, due to congenital problems, degeneration, the “three highs” and other issues, an atrium sometimes beats irregularly. When this happens, blood may coagulate into a blood clot in the atrium; if the clot flows to the brain, it will cause a stroke. The heartbeat of patients with atrial fibrillation can sometimes be fast, slow, or irregular, which may cause them to feel unwell and experience dizziness, wheezing, or chest pains. About 30% to 40% of patients, though, may not have any obvious symptoms.

While the symptoms themselves are not too serious, they can cause severe complications. Studies have shown that patients with atrial fibrillation are four to five times more likely to have a stroke than the average person. What’s more, most strokes caused by atrial fibrillation are more severe and cause a wider range of damage to the brain, leaving patients with severe disabilities such as paralysis, blindness, and cognitive impairment. The risk of death is also higher than that associated with strokes from other causes. In short, the dangers associated with atrial fibrillation simply cannot be ignored.

Because the consequences of atrial fibrillation are so serious, it is imperative that the condition is detected and treated early, but the symptoms of this invisible heart disease are not obvious and can be difficult to spot. In the past, people thought to have atrial fibrillation were generally sent for an electrocardiogram (ECG). However, this method usually only measures the heart rhythm for ten seconds, and atrial fibrillation may occur intermittently, showing a normal sinus rhythm on the patient’s ECGs. A longer ECG exam, lasting at least 24 hours, may be necessary to confirm the condition in some patients.

Some cases may require a simultaneous cardiac ultrasound and cardiac catheterization to confirm the diagnosis. Unfortunately, lack of public awareness and the relative complications of these exams may deter even high-risk individuals, such as patients with the “three highs”, from undergoing regular examinations. This narrows the window of opportunity to catch the disease early.

An announcement by the USFDA offered intriguing news for both technology fans and the medical community. For the first time, two smartwatch applications developed by smartphone brands were approved for use for electrocardiogram examination. By analysing the user’s pulse, the watch detects atrial fibrillation as it occurs, and notifies the user immediately.

The user only needs to put their fingers on the button for about 30 seconds for the programme to detect whether their heartbeat is normal. Their health data is then classified and stored in the cloud, allowing the user to share it with medical staff later as a reference for obtaining treatment. The simplicity of the entire examination process gives cardiology specialists hope that these “finger-to-finger” procedures will allow more patients to detect and obtain treatment earlier, greatly reducing their risk of stroke in the future.

Once diagnosed with atrial fibrillation, the patient will be prescribed blood thinners by their doctor.  These dilute the blood and reduce the risk of blood clots forming, thereby eliminating the risk of stroke. Blood thinners currently fall under two categories: traditional warfarin and new generation blood thinners.

Traditional warfarin comes with many restrictions. Patients can’t eat a variety of fruits and vegetables such as goji berries and spinach. They must stop using certain Chinese medicines, and have to perform frequent blood tests to ensure they have the ideal drug dosage. The inconvenience means some patients may not comply or keep up with their medication, leaving them at risk for an underlying stroke at any time.

This is why the medical community has encouraged patients in recent years to use new generation blood thinners instead. Among other advantages, the drug levels are more stable, so patients don’t need to perform frequent blood tests or take special precautions in their diet, making it much more convenient for patients and their families. For some patients, a pacemaker is a better choice to maintain a normal heartbeat. In severe cases, patients may need to consider surgery or other treatments to address their abnormal heartbeat. The right treatment plan all depends on the individual patient’s physical condition, lifestyle and expectations.

Another advantage of the smartwatch is that it can “guide” people to better exercise habits. For instance, moderate-intensity exercise is recommended for most people to improve heart function. “Moderate-intensity” is calculated as a target heart rate of 220 minus the individual’s age, then multiplied by 70%. The goal is to hit this target heart rate during regular exercise – something a smartwatch can easily track as you move.

Strokes caused by atrial fibrillation can be avoided. The key lies in detecting the condition early, taking your medication as instructed, watching your diet, and exercising regularly. The next time you buy a watch, consider a smartwatch to help you with these functions!

Back to top
Keyword Search

We use cookies to personalise content and ads, to provide social media features and to analyse our traffic. We also share information about your use of our site with our social media, advertising and analytics partners who may combine it with other information that you’ve provided to them or that they’ve collected from your use of their services.

Cookies are small text files that can be used by websites to make a user's experience more efficient. The law states that we can store cookies on your device if they are strictly necessary for the operation of this site. For all other types of cookies we need your permission.
This site uses different types of cookies. Some cookies are placed by third party services that appear on our pages. You can at any time change or withdraw your consent from the Cookie Declaration on our website. Learn more about who we are, how you can contact us and how we process personal data in our Privacy Policy. Please state your consent ID and date when you contact us regarding your consent.